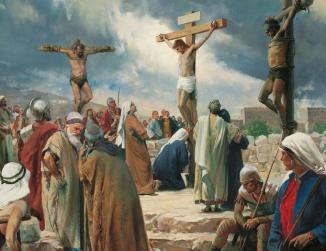 Today is Easter Sunday/Resurrection Sunday 2018.  It’s a day when Christians celebrate as almost exclusively historical the alleged crucifixion and resurrection of Jesus Christ whom they believe to be the Son of God.

I’m going to assume most of you know the official story told by the Church.

But in the spirit of free thinking and philosophy (warning: the apostle Paul says philosophy and individual thought is dangerous and we must not allow women to speak their minds here), I would like to offer to you a more historically plausible explanation for what happened in the 1st Century CE, for the origins of what became the Church and the Christian religion.

In brief: the church came first and invented Jesus as the “Son of God.”

So let’s go back to the beginning.

The first century CE was the height of the Roman Empire as most people think of it. After defeating Marc Antony and Cleopatra in 30 BCE, Octavian Caesar has himself proclaimed the first Emperor, “Caesar Augustus” in 27 BCE and ruled until 14 CE as a living god in the eyes of the State and of the people.  In the Roman province of Judea, the Julius Caesar put an end to the in-fighting that still raged among the Hasmoneans and appointed Antipas to rule the region on behalf of Rome. In 40 BCE the Roman Senate set up Antipas’ son Herod as “king of the Jews” in a move that proved to be satisfying to the Romans but only the Romans. Chaos ensued with a string of governors and other rulers who attempted to maintain order and keep peace in the area — if only to keep the flow goods constant regionally from Egypt through Judea, and ultimately back to Rome.

It was, in essence, one very big mess — and that was only the secular side of things. Religiously things were in even more disarray, chaos stretching back centuries. The same in-fighting that led to the rise of Judah ben Maccabee continued into the common era. It was a time and a place ripe for revolution — religious and social.

Among the religious establishment were Pharisees, the Sadducees, and the Essenes (see http://www.jewishvirtuallibrary.org/pharisees-sadducees-and-essenes).   These three groups more or less controlled religious life in Judea and, as you might expect, not everyone was happy with it. Organized religion in any form has a habit of becoming corrupt, of being easily bribed by power and money and the Pharisees and Sadducees were not exempt.

Across Judea educated women and men gathered together to express their displeasure at the world around them.  They organized and came together as communities to address abuses in the system around them. Leaders emerged decrying injustice for the poor and disadvantaged. They preached against poverty and the systems that made the rich richer and the poor poorer. They taught that we should help each other and do everything we can to alleviate suffering.  They taught tolerance and acceptance. Peace. Love.  They were not against the rule of law, but insisted that laws be just. They insisted that all people were people and that no person could own another.

They fed the hungry. They clothed the naked. Sometimes they rioted to demand justice.  Sometimes they were rounded up by the authorities and put to death. Some were even crucified by the Romans who really did not care much to distinguish between a Jewish woman opening her home kitchen to the hungry and the zealot who believed in a conquering messiah (a pharisee teaching).  The name “Christian” was applied to all of them.

Then came a man named Paul. Paul (Saul) was a pharisee. He believed in a messiah. He believed in an oral Torah and the written Torah attributed to Moses. He believed in an afterlife and a fiercely patriarchal god who not only punished the wicked but considered most forms of female sexuality wicked. Paul unified Christianity and infused it with long held beliefs from the pharisees.  What was once about feeding the poor and healing the sick was now about his version of God and his belief in a messiah that had already come.

Stories were invented to support Paul’s claims.  Church oral history was put in service of Paul’s messiah who became the sole source of church teachings.  The original church leaders were turned into disciples of this one great master, this messiah, this “king of kings and lord of lords.”

To make it stick, the Gospels were written around Paul’s messianic mythology. And this figure — Jesus (a Latin name) – had to be defied.

Paul invented Jesus Christ. He took a beautiful social movement and he made a religion out of it designed around what Paul felt God was like and what he believed to be true about God.  Jesus was made in Paul’s image.

Now is it possible that there really was a Jesus Christ, a historical person who really was everything attributed to him and really was the center of the Christian movement of the early 1st century?  Perhaps.  But as a scholar, a historian, a philosopher I am forced to ask:  which is more likely: that every word of the New Testament is true and Jesus Christ lived, died, and taught everything attributed to him by people living decades after his alleged death and resurrection — or that Christianity began as a Jewish social movement designed to help the disadvantaged and that Jesus was invented later by Paul and others with a vested interest in hijacking the movement for their own purposes?

Time and time again we see “men of faith” using religion to service their ambition.  I see no reason to believe Paul was any different.

Though Jesus Christ is likely the imagination of the politically ambitious, the original movement centered around kindness and healing IS VIRTUOUS.  It is my hope that the church will rededicate itself to those wonderful teachings again and take a leading role once more in ending poverty, hunger, and disease. Christianity can be so much more than what it is today.