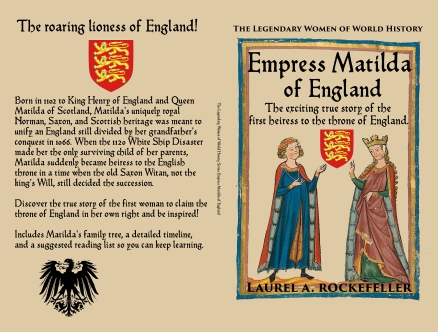 As Matilda prayed King Henry quietly slipped into the chapel, “You are still in mourning, Matilda.”

Matilda turned to him and bowed her head respectfully, “Mein König!”

“You are not empress and this is not Germany.”

“Oui, sa est ta fille, Henri,” confirmed Queen Adeliza as she strode out from behind one of the chapel’s many columns. Adeliza curtsied to Matilda, “Guten Morgen, meine Kaiserin. Fröhliche Weihnachten.”

“Fröhliche Weihnachten,” smiled Matilda before switching to English, “You must be my step-mother.”

If you are a fan of the Legendary Women of World History Series, you are probably familiar with quick language switching from the above except from “Empress Matilda of England” that hallmarks the series. Historical persons speak many languages in the Legendary Women of World History, a reflection of their personal histories and the world around him. Speaking in one’s native tongue, at least occasionally, helps us remember who people are.  Language is a core part of our identity, our psychology, even when we are not conscious of it. Words carry not only their direct meaning, but a cultural subtext that literally alters how we think.  One of the many benefits of speaking multiple languages, at least partially, is the way each language forces us to work from a different point of view.

Chinese, for example, uses the same verb form regardless of singular, plural, or when something happened.  In Chinese things these are signaled through nearby words. For example 我说中文 means “I speak Chinese.” 说 is the verb “to speak.” 她们过说中文 means “they [female] used to speak Chinese. In spoken Chinese the words “he” and “she” are pronounced exactly the same. The ideas of “he” and “she” are contextual in Chinese. 她们过说中文 and 他们过说中文 sound exactly the same and in English are translated the same since English does not distinguish gender in the third person plural unlike French which does (ils sont verses elles sont).

Specific traits from our native language shape our view of the world. Gender is not immediately obvious in spoken Chinese (only in written Chinese) unlike many Western European languages where gender is instantly recognizable. Welsh often begins sentences with the direct object and puts the subject last. A famous example of that from Gwenllian ferch Gruffydd is my favourite line, “Cymraes dw i,” which means I am a Welsh woman. Cymraes means Welsh (person) in the feminine form (the masculine is Cymraeg which is the same word as you use for the Welsh language). Dw i means “I am.” Welsh often mutates. “Gymraeg” is the same word as “Cymraeg” and which one you use depends on context — and is one reason why the language is best learned in person with native Welsh speakers.

It is this massive role that language plays in our lives that requires the persons in the Legendary Women of World History series to occasionally speak a few words of her or his native tongue.  When Baron William Fitzgerald calls Matilda, “F’arglwyddes!” she and you along with her immediately know that William is Welsh. F’arglwyddes, if you haven’t guessed, means “Milady.” Incidentally “Fitz” in a name means “son of” and is the French equivalent of Welsh “ap” in a name.

Fortunately, most of the non-English in the LWWH can be figured out through context. Contextual reading is not usually the way Americans are taught to read, but it is critical skill to develop and one more reason why the LWWH make excellent texts for home schools. Contextual reading means you are working not only on the word level, but the sentence and paragraph level to discern meaning. In chapter one of Empress Matilda, I kick this up a notch in a single scene.

Here we are confused and meant to be confused. Matilda is eight years old and suddenly ripped from her home and family in London to be presented to Kaiser (Kaiser means “emperor” in German) Heinrich V to whom she is to be wed. Like most royal brides of the middle ages and early renaissance, she does not speak a word of her future husband’s language. Because we do not understand on a sentence level what he is saying to her, we share in her terror and confusion and in her relief when, soon after in the scene, the English ambassador steps forward and summarizes what Heinrich just said, telling her that this is the emperor to whom she is to be wed and conveying to her his reassurances that he means her no harm.

This is context on the scenic level which is the level that we operate on when in social situations. For example, a simple “Merry Christmas” can express completely different ideas and intentions depending on who we are speaking to, when, our tone of voice, and our histories with the person or persons we are saying it to.

This is the level you are sometimes asked to work on when reading Empress Matilda of England. This is a major reason why Matilda is for ages twelve and up; it requires a more advanced reading proficiency than the six previous books in the series.

Whether Empress Matilda of England becomes your next favourite book or not, it is my sincerest wish that you will never stop reading, never stop learning, and never stop seeking to make tomorrow better than today. Let’s roar!