Being a liberal to me (Democrat for USA and Labour for UK) means I believe in fairness and equality for everyone. After learning a great deal about ancient northern Europeans and ancient British (in the larger sense of the group of islands) in particular as part of the research on my books “Boudicca: Britain’s Queen of the Iceni” and “Mary Queen of the Scots” I really came to appreciate how completely different our ancestors’ cultures were from their conquerors. 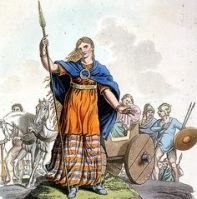 For example, they didn’t believe the land, let alone living beings could be owned. Leaders were usually on the community level and either directly elected or inherited their authority from their parents — but completely impeachable by the druids if they proved incompetent or unethical. The whole of those ancient societies was built on fairness, empathy, and cooperation. And when you consider how difficult life was, especially in Britain, it only makes sense. They were so incredibly individualistic and while scrappy (think what you see at football matches today), they really didn’t organize armies and go war. Most of the time they brawled it out a little or went to the druids or their appointed/elected leaders to sort it all out. And when someone was hungry, they were taken care of.

In my opinion, THAT IS THE WAY SOCIETY NEEDS TO BE. So for me, being a liberal means doing everything I can to bring back the values and the social structures that our ancestors had 2000 years ago. People tell me it’s impossible — you cannot undo the damage done by Roman conquest. And while I confess on a language level, we really might be stuck with that legacy, I do believe that the rest is our birth right. Because it’s the right thing to do. We need to stop being calloused towards the suffering of others and resolve ourselves to work together again rather than letting the fat cats pit us against each other. You are my friend and ally — not my rival.

2 thoughts on “What being “Liberal” means to me.”